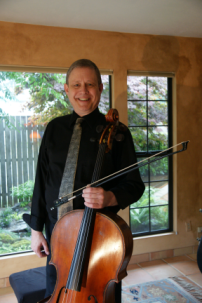 Dale with his cello "Olga"

Dale Tolliver has been performing music professionally since 1969.  His work in symphony orchestras and in free-lance engagements has found him on-stage with such diverse performers as Marilyn Horne, Itzhak Perlman, Andre Watts, Henry Mancini, Liberace, and Lamb Chop, and in such diverse municipalities as Vienna, Austria and Blue Grass, Iowa.

Among the highlights (with Amedei, of course!) of his schedule as a freelance musician, Mr. Tolliver is the continuo ‘cellist with Portland’s Bach Cantata Choir, and is a founding member of Threeplay Piano Trio.

Dale can currently be heard playing in the band for ART’s rock musical production Next To Normal. Not to be missed!